I have been flying large multi-crew aircraft for many years now. Just recently, I  returned to my general aviation roots when I purchased a Commander 112TC.  One thing I noticed right away was something we in the airline business take for granted everyday…

This is because modern aircraft altitude preselectors are tightly integrated into flight control and management systems and are ubiquitous in terms of safety. This is becoming true of modern small general aviation aircraft as well. However, if you happen to rent or own an aircraft that was built prior to 2000, these technologies were not available and had to be added later.  As an owner, this means COSTLY upgrades.  As a renter, HIGHER rental rates for upgraded aircraft. There has to be a better way.  Right?

Having witnessed the safety benefits first hand using a dedicated altitude preselector, I immediately began searching for a low cost alternative.  Knowing that installing one in my panel was going to be costly, I began searching for a “virtual” solution through the iPad App Store. None existed.  So I decided that if I wanted to fix this problem I would have to design and create it myself.

The result is an altitude alert and monitoring solution that was designed from the ground up to mimic the capabilities and safety features that I myself use everyday at work flying the “jet”.   But at a FRACTION of the cost of a panel mounted unit.

I’ve been using AltitudeAlert in my Commander (and now Centurion) since its inception and consider it to be an invaluable tool, especially while flying IFR.  My hope is that all pilots of small general aviation aircraft can benefit from the safety features that AltitudeAlert provides.  Making flying IFR and VFR flying safer and more enjoyable.

AltitudeAlert has come a long way since the basic preselector that I originally created in version 1.  With the integration of VNAV (Vertical Navigation), Apple Watch, VFR Altitude Hold mode, and Universal App integration for all of your Apple devices, AltitudeAlert is a multi-featured altitude management system.

Raymond Chase, the designer and engineer of AltitudeAlert has been a professional pilot for over 25 years and currently flies B737s for a major US airline. 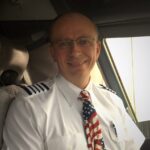